National Student Drama Festival 2022: a “utopia that theatre could be”

Middle Child company member, Marc Graham, writes about his experience of attending this year’s National Student Drama Festival as an associate – and why the festival matters so much

This was the first National Student Drama Festival back in-person since 2019. In the time between then and now it went digital, winning a Digital Trailblazer Award at the Digital Culture Awards and continued to do what it does best: working with young people and allowing a space for the future generation of theatre makers to flourish.

I first came to NSDF as a student in 2009. I straightened my hair for the show and was mainly carried around on the shoulders of my mates, while we reached for stuff in the distance.

I came back to do another show with the same mates a few years later, after we had graduated and were at the start of our careers, this time with curly hair and this time I shouldered their weight, whilst reaching for more stuff in the distance.

I became an associate in 2019, after having worked with that year’s festival director, James Phillips, in 2017, on Flood. I sacrificed my body by jumping into a freezing cold body of water in an old dock in Hull that winter, while a heavy set, boats and fire swirled around me. That was the job interview. They took two years to get back to me, but I got it.

So, April 2022. NSDF is back for its 66th year, it’s survived the pandemic, it’s a digital award winner, back in Leicester at the Curve and I arrive for kick-off. That in itself is a remarkable achievement and all down to the tireless effort of James Phillips, Lizzie Melbourne and Ellie Fitz-Gerald. JLE.

Under team JLE, NSDF has shifted from a competition to a festival that celebrates and cultivates great work. 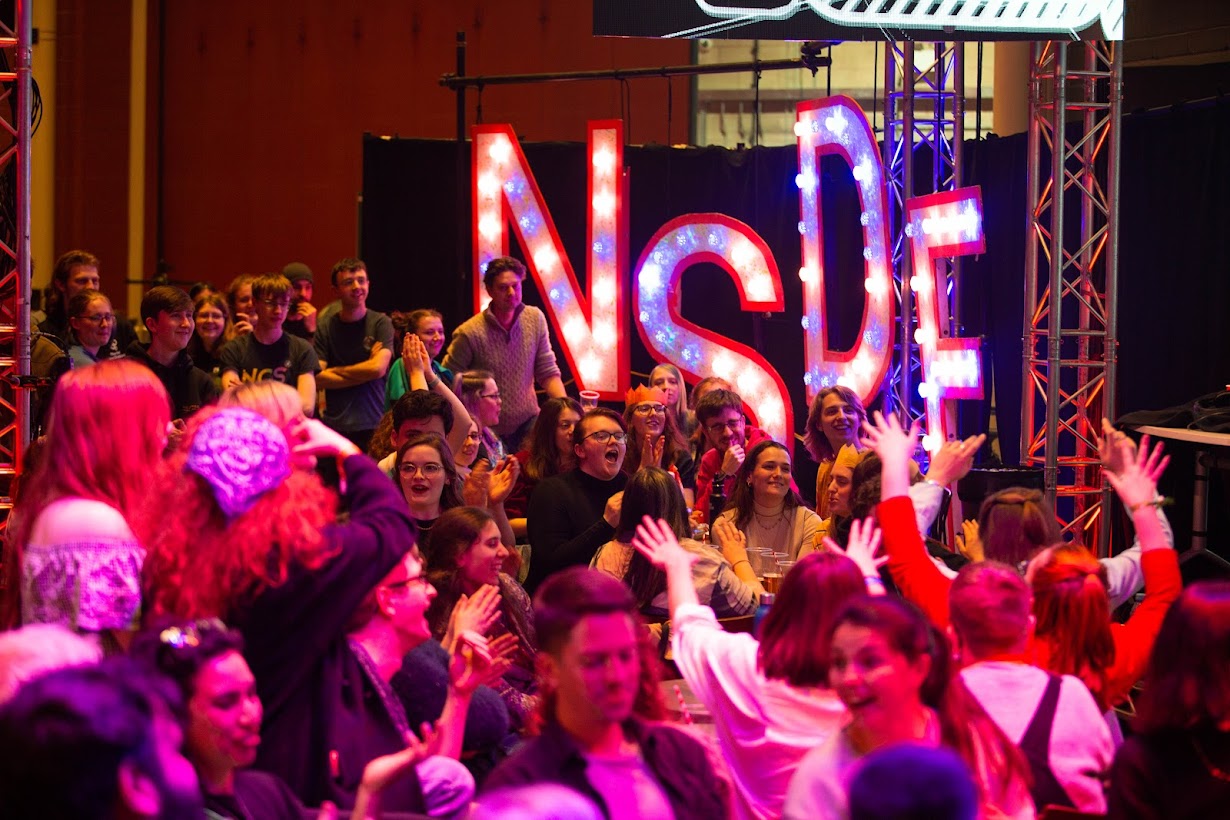 First show, DJ Bazzer’s Year 6 Disco, from Chewboy Productions. As I sit down for this I realise that I haven’t seen any live theatre since the pandemic began. I was feeling a little emotional about this, but then the year six tunes began, I settle in, I’m a little too enthusiastic on the audience call and response stuff and I’m just enjoying a night out at the theatre. Then I get really sucked into this world, this character, the performance, the sound design, lights, everything. The show is great, see it if you can.

My first workshop, “Creating a Character from Very Little”, was the next morning. I was led to the space by one of the many incredible NSDF management team, who had forgone writing her dissertation to be at NSDF, a decision I wholeheartedly approve of.

The workshop basically uses some rehearsal techniques that Middle Child use today and some from our early years – before the police fines for disturbing the peace (not joking).

The session ends with me asking the performers to “take their characters for a walk” around Leicester on a sunny Sunday morning, before coming back to partake in a group improvisation. No one gets fined and they all approach the workshop with such drive and passion. Of course they do. They are all excellent.

Next I’m on a panel discussing “Is Theatre Shit? And How Do We Fix It?”

Topics discussed include de-funding the Royal Opera House and subjects of heavier weight, and a lot of this came from students themselves. That’s the best thing about these. Young theatre makers are unafraid to ask the big questions, the necessary ones. They’re inquisitive and it’s needed.

One of the big things here was, where are the routes for emerging theatre makers now? Edinburgh is unaffordable and Vaults has been shut down again. From 2020 we have lost two years of crucial development for emerging companies and, unfortunately, we have lost many companies completely. We didn’t have a specific answer for this right now. 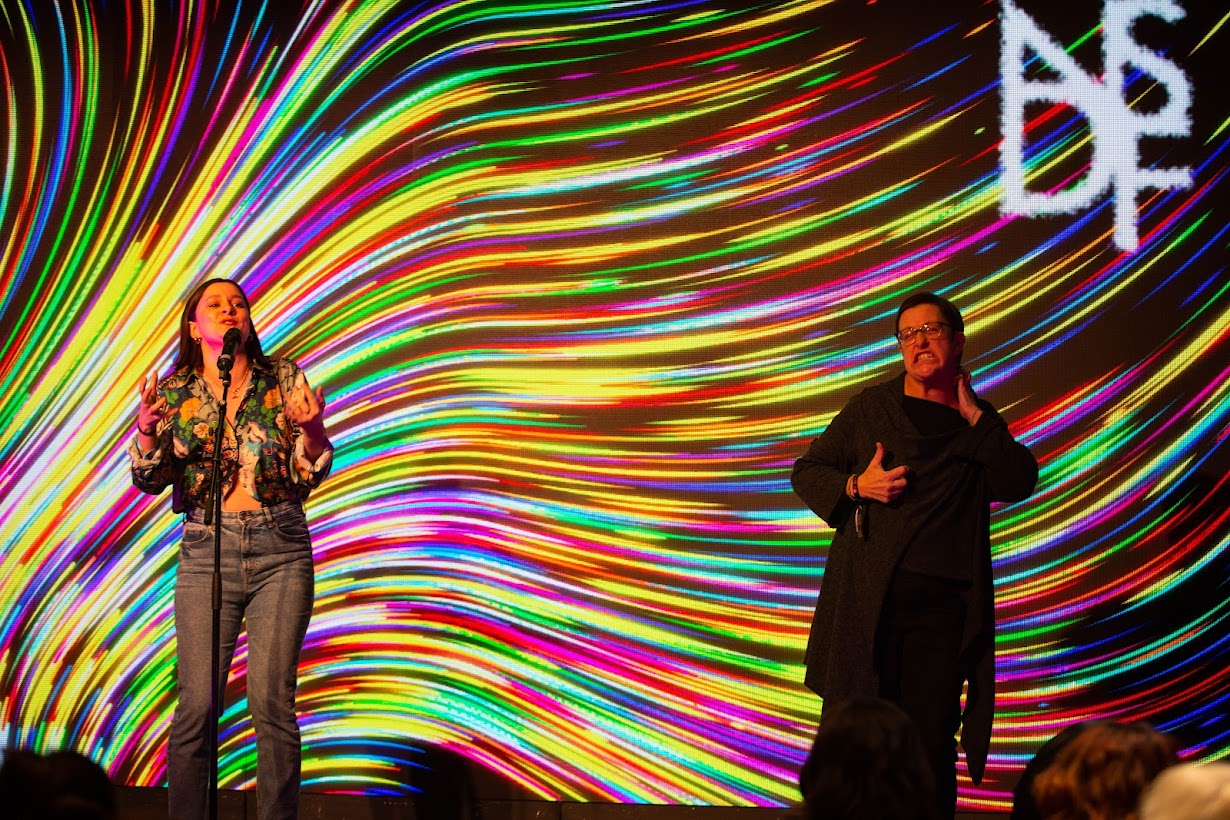 In between the scheduled programme, films are filming, emerging critics are critiquing, tech teams are teching. Conversations are happening: in the bar, in cafes, in outside venues, in the toilets, between associates, emerging theatre makers, students, professionals, writers, designers, academics and the people of Leicester. This is the real value of NSDF.

Ali Pidsley and I are treated to a viola rendition from Chris Thorpe. Without the viola. He declines every request I make. It’s fine, another show is starting and we’re gonna be late.

It’s also here where you meet emerging theatre makers of NSDF past who have now emerged. I meet the brilliant Definitely Fine Theatre, here with another show. I saw Ezra at Edinburgh uni pre-pandemic. They’re a company finding their voice, experimenting and it’s wonderful. We say hi, they tell me I’m the reason that they’re here, I play it down but only half-heartedly. I discovered them first okay… no I didn’t. But, you know, I sort of did. No, I’m joking. But also yeah, it was me.

RESERVATION. DaDaFest x NSDF. Box of Frogs. A group of young disabled, Deaf and neurodivergent performers having FUN on stage, sometimes at each other’s expense. Is some of it uncomfortable to watch? Absolutely, and that is the point. It is genuinely one of the most joyous experiences I’ve ever had in a theatre.

At the Q&A I’m buzzing and say things really loudly about how I just wanted to join in and dance with them onstage at the end. I later raise a second point which is basically the same as the first because I’m just so pumped up.

This show must have a further life.

It’s captioned, audio-described and BSL-interpreted – as is every show this year. #PissOnPity 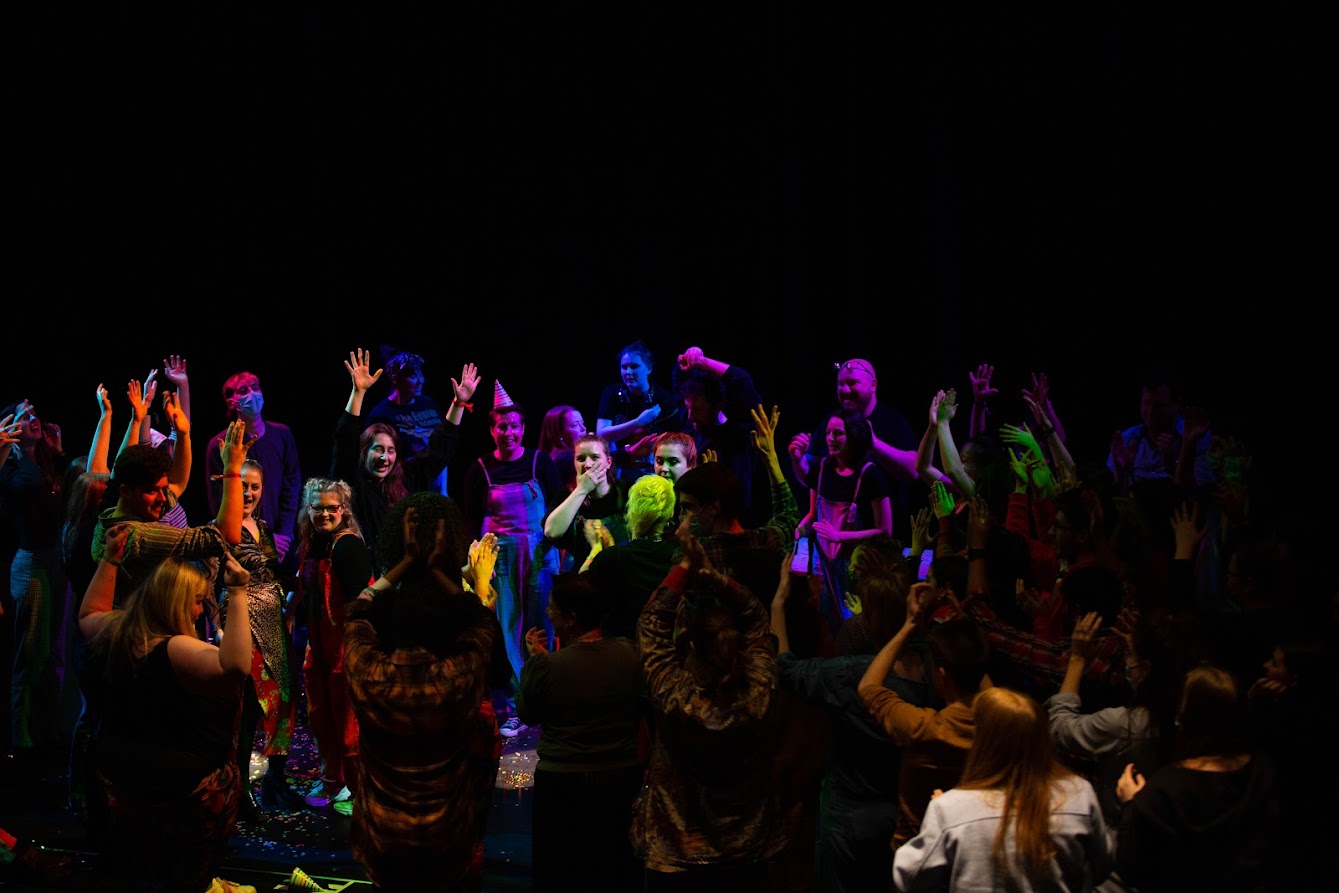 After their last show, I meet Nickie Miles-Wildin in the bar, on the way to hosting the spoken word night. She says she encouraged the audience to do what I suggested in the Q&A and they joined the performers on stage. She said she got in trouble, something about the Curve’s health and safety protocols. That’s rock’n’roll. I’ll take responsibility for that.

Nadia Emam and I host the spoken word night. It’s on the purpose-built NSDF stage in the bar at Curve. The mic is live and ready to go. Nickie Miles-Wildin is now halfway through a bottle of champagne and is trying to heckle me from the front row, but unfortunately for her 11 years of being a panto dame means I shut her down without giving it a second thought.

The standard is phenomenal. We have actors, producers, technical staff, NSDF alumni, management staff all standing up in front of 100 people and speaking their words. Then we have Viktor. Viktor asks me at the side of stage if they can perform, I say absolutely. Viktor is second from last, Viktor steps up to the mic. Viktor says:

“I’ve never performed my work in front of anyone before. I’m a dentist from Leicester. I don’t know what this is. I’ve been out drinking and was passing by and saw the lights and heard the noise. Sorry, I’m nervous. This poem is Untitled. Thank you.”

It was about how they thought they could never be loved, that they didn’t fit in, in a strange body and a foreign land.

It was one of those true moments of magic.

The day after I ran a second workshop on drama school auditions, with a last-minute offer of help from Hannah Miller, head of casting at the RSC. The second panel discussion was also about drama schools. The main takeaway from that: schools are not doing enough to push for access. It must start there, they could be the industry leaders, if they step-up. 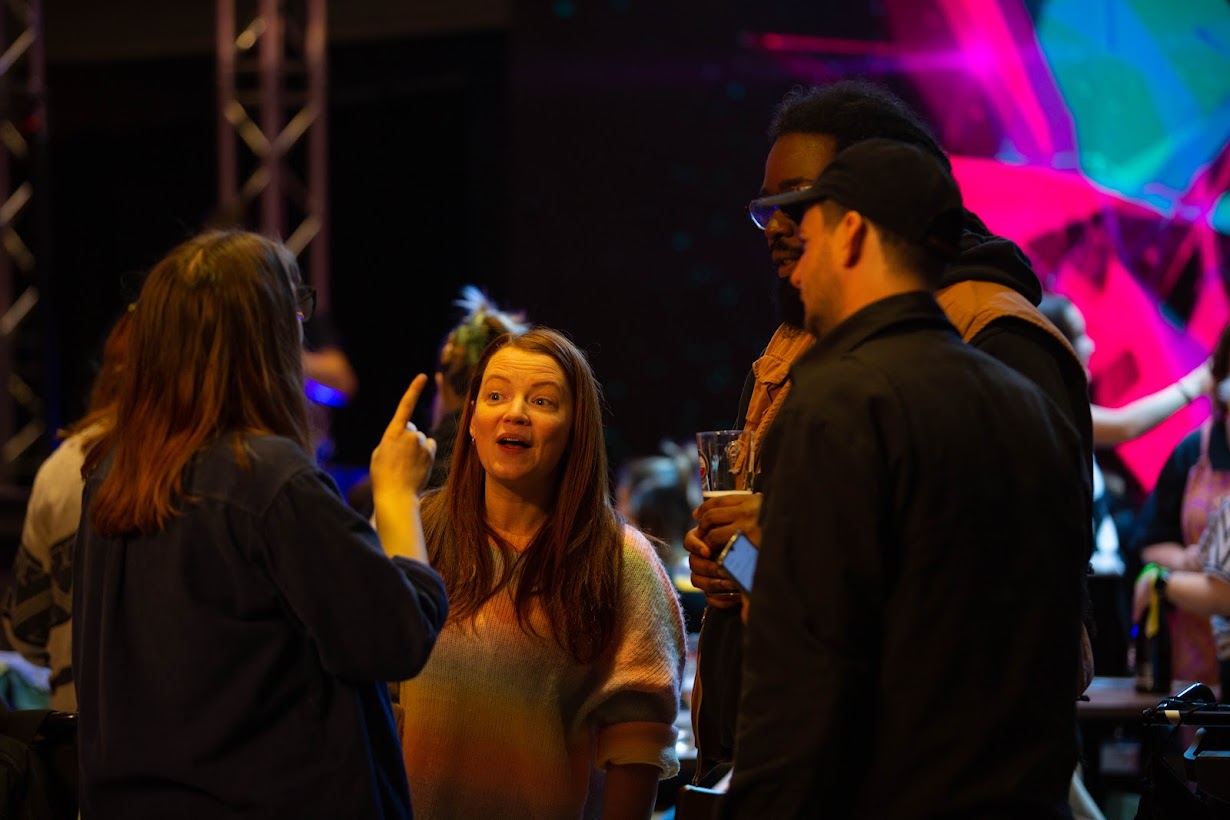 NSDF is partly about the shows, but it’s more about the conversations over coffee, the sharing of experiences, providing a safe platform to experiment and discover.

It’s a place where theatre professionals meet student theatre makers as equals. I mean, many of us were all them at some stage. And if we weren’t students, we had to learn somewhere.

This does not happen in this industry enough. Some of the professionals I met 13 years ago I still work with today. I always say: find the people who share your values and opinions and hold on to them tightly. NSDF is a place where this happens.

It is the utopia of what the theatre industry could be. Every year that goes by in this career I get a little more jaded, a little less hopeful, but each year the next generation of theatre makers at NSDF revitalises that. It may only last a week, but I take the values of NSDF with me for the rest of the year.

On my last morning I’m sitting with Chris Thorpe at breakfast. We both have our phones in hand. He looks at me across his plate of hash browns, he slumps his phone down after losing to me at chess online and says:

“The reality is, is that we probably get more out of this than the young people do.”