Last week, the Recover, Restart and Reimagine group joined Steve O’Smotherly to learn about a useful tool for teams to more openly communicate about getting the best out of each other.

Most of us have worked with people who, despite all the will in the world, we feel we struggle to mesh with. I’ve worked with many teams, adapting to various working environments and systems, and I can pinpoint where it’s been a breeze or where I have had to exert a lot of energy to be at my peak. Interestingly, until listening in on Recover, Restart and Reimagine’s Four Season Profiling session, I had considered this to be a ‘me’ problem. Turns out that often where things don’t mesh can be related to the personalities in the room, and with reflection and communication, barriers can become significantly smaller.

Four Seasons profiling encourages reflection on the impact we may have on the people around us. Based on traits and preferences at work, we fit into four different categories: Spring, Summer, Winter and Autumn. Each season has an opposite (Spring/Autumn and Winter/Summer) to how they naturally engage with the task at hand, with strengths and weaknesses in all. The model encourages a team to communicate their preferences and what they need from other seasons to get the best out of them.

For me, the biggest lightbulb moment in this session was the concept that the better the day an individual is having, the more they lean into their season tendencies, which can naturally have a negative impact on their opposite seasons. Look at it like this: as a Spring, I am a ‘blue skies thinking’, big ideas person with an enthusiasm for new projects, problem-solving as we move, but this ‘go with the flow’ mentality is the foil of an Autumn. Autumns prefer a cautious approach, moving with purpose to avoid errors. They prepare, research and analyse, carefully planning every move until a project is complete. So if I’ve got a big idea, I’m moving existing projects and meetings around, raring to go THAT DAY on a shiny new passion project, so an Autumn is going to get hella frustrated with me. Equally, an empathetic people-oriented Summer, who prefers consensus and considering others to alleviate stress, is going to clash with an efficiency-focused Winter who wants quick and effective results – very ‘work now, feelings later’. 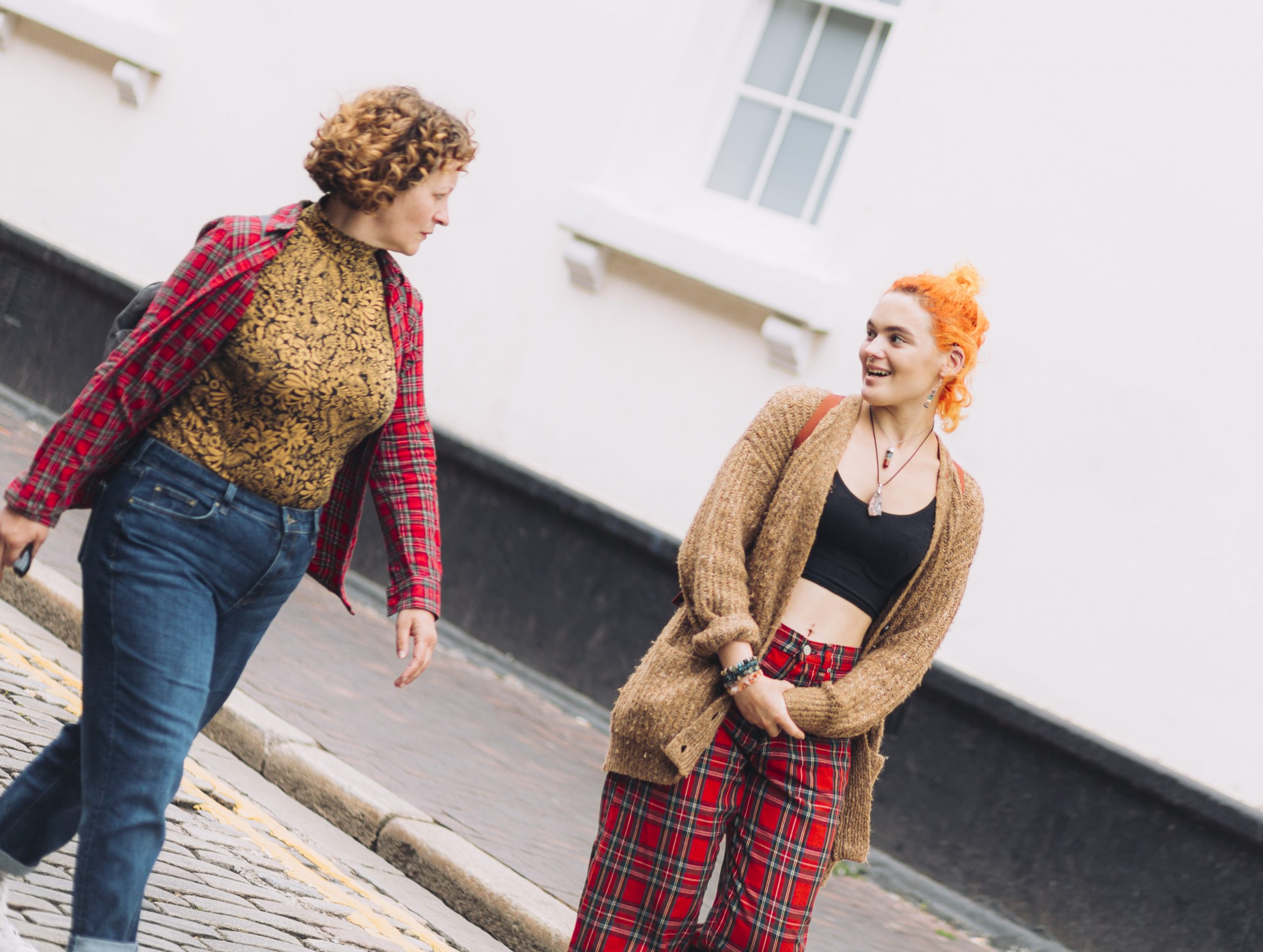 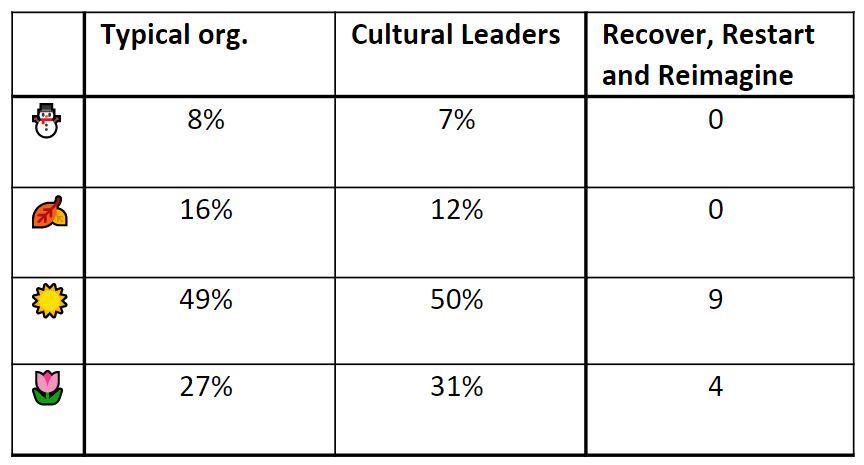 Our Recover, Restart and Reimagine group were made up of mostly Summers (9 people) with the remainder being Springs (4 people). With being only a small sample, this figures when we compare this to a typical organisation or groups of cultural leaders.

From the group, actor and writer Angelo Irving is a Summer. He had the opportunity to discuss various points with other Summers around strengths, weaknesses and preferences. The Summer group identified themselves as friendly, stable, laid back and authentic, being good sources of morale through comedy and understanding, although admitted that where they may negatively impact other seasons is resistance to getting stuck into a task and struggling to focus, finding themselves juggling a lot at once. Facilitator Steve encouraged the groups to communicate openly and honestly, giving prompt questions for each group of seasons to explore, something that comes naturally to Summers but other seasons may have had more difficulty with.

The biggest take away from this session is that with good communication and clarity, polar opposites do not mean that there is chaos in a room when put together on a project. Rather, knowing your seasons and acknowledging your preferences can help start a preparation to better communicate an effective way of working with each other with understanding. And it works! In the past, I have been in a two-person team with an Autumn before, and as we had brilliant communication of what we both needed to be effective on the project, we played into our strengths with consideration of what we both needed from each other.

If you’d like to explore the following season descriptions and think about which one you most identify with, then use the prompts at the bottom to think deeper into how we can better work with others. 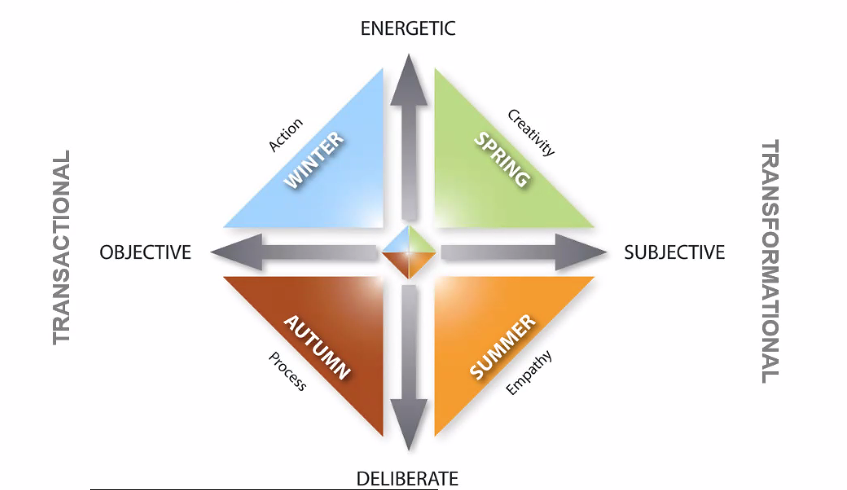 Spring – Is a preference for blue-skies ideas, creativity and spontaneity. A Spring is resilient under stress, being an adaptable ‘go with the flow’ personality. Seen as ‘fire starters’ they are enthusiastic about new projects and enjoy change, but certainly aren’t completer-finishers, causing other seasons stress by changing goal-posts and shifting focus often. With their passion, they are emotionally driven resourceful members of a team and offer much value through harnessing their wide network and skill base.

Autumn – The opposite of a Spring, Autumns are evidence-based thinkers and act cautiously with purpose to avoid errors. Rarely taking things at face value (‘Don’t tell me you’re funny, make me laugh’-types), they prefer to establish the facts, looking for clarity and information. Autumns are perfectionists and use a thoughtful approach to work, enthusiastically research and analyse. With being detail-oriented, they can get bogged down and over-analyse, and can be very sensitive to feedback because of the energy they put into a project.

Summer – Being the largest represented season according to Steve’s research (49% of thousands of participants across various sectors), Summers are people-oriented. They lead through consensus, promoting harmony and balanced, often talking of the collective success of a team (“We” achieved X, rather than “I”). Warm and easy-going, they have a calm approach to stress, putting others first thinking of the impact on the team, but often become stress-sponges putting other’s problems on their shoulders. A Summer can have a lack of self-belief and undervalue themselves, struggling to take positive feedback, with an approach of ‘I am just doing my job’.

Winter – The opposite of a Summer, a Winter leads through compliance. They like efficiency and focus and are extremely hard working with a preference for action, competition, achievement and results. They have high levels of self-belief and confidence, and some may define this season as the typical ‘Alpha work culture’ stereotype. Often seen to handle stress well, they may perceive a pressured work environment as an ideal which can result in a lack of empathy for others. Their output and work ethic is exemplary but can struggle to know when to stop at the cost of their own personal needs. A Winter won’t use 25 words if 5 is enough, and with that can be impatient, seeing their way as the only way. sometimes coming across as insensitive.