Starting a directing placement in a pandemic

Hello, I’m Annabel Streeton and I’m about to start a three-month Regional Theatre Young Director Scheme (RTYDS) placement with Middle Child and Hull Truck Theatre. Right in the middle of a global pandemic.

I am a University of Hull Drama and Theatre Practice graduate. During my time there I was given the opportunity to direct a few plays and absolutely fell in love with directing, through playing around with a script and creating new meanings or getting stuck into making a scene work. After graduating I decided to settle in Hull after briefly returning home to Essex, as I missed the city which is now my home. I fell in love with Hull and the art scene here, especially after living through 2017 and its first year as UK City of Culture.

After coming back to Hull I met with Daniel Swift, who told me about his new theatre company, Concrete Youth, and his plans to develop shows for audiences with profound and multiple learning disabilities. At the time I had never really heard of multi-sensory theatre, but loved the idea of forging a company which would be completely accessible to people who couldn’t usually go to the theatre. I am now associate director for Concrete Youth, where I will direct future shows, but I also plan to become a freelance director.

For this placement I was originally meant to assist in rehearsals for Middle Child’s new show, which would have begun this week, and on the tour of The Canary and the Crow, as well as assist on the Grow Festival at Hull Truck Theatre in May. Sadly the pandemic has scuppered those plans, however RTYDS, Middle Child artistic director, Paul Smith, and Hull Truck Theatre associate director, Tom Saunders, have been able to put together an alternative programme, which I didn’t think would be possible.

I will still be able learn what I was hoping to, through a programme of workshops, discussions and activities: how to prepare for rehearsals as a director; the day-to-day runnings of a theatre company; learning rehearsal techniques that will enable a director to get the best out of actors; how to remount a show for a tour; how to direct shows with big community casts; and adapt well-known plays for stage, as well as new writing. It will just be through Zoom instead, including making use of the National Student Drama Festival’s impressive line-up of online workshops this week. I will also get to direct some of the Out Loud scratch night submissions, which will be broadcast on local radio, and work on my own project. 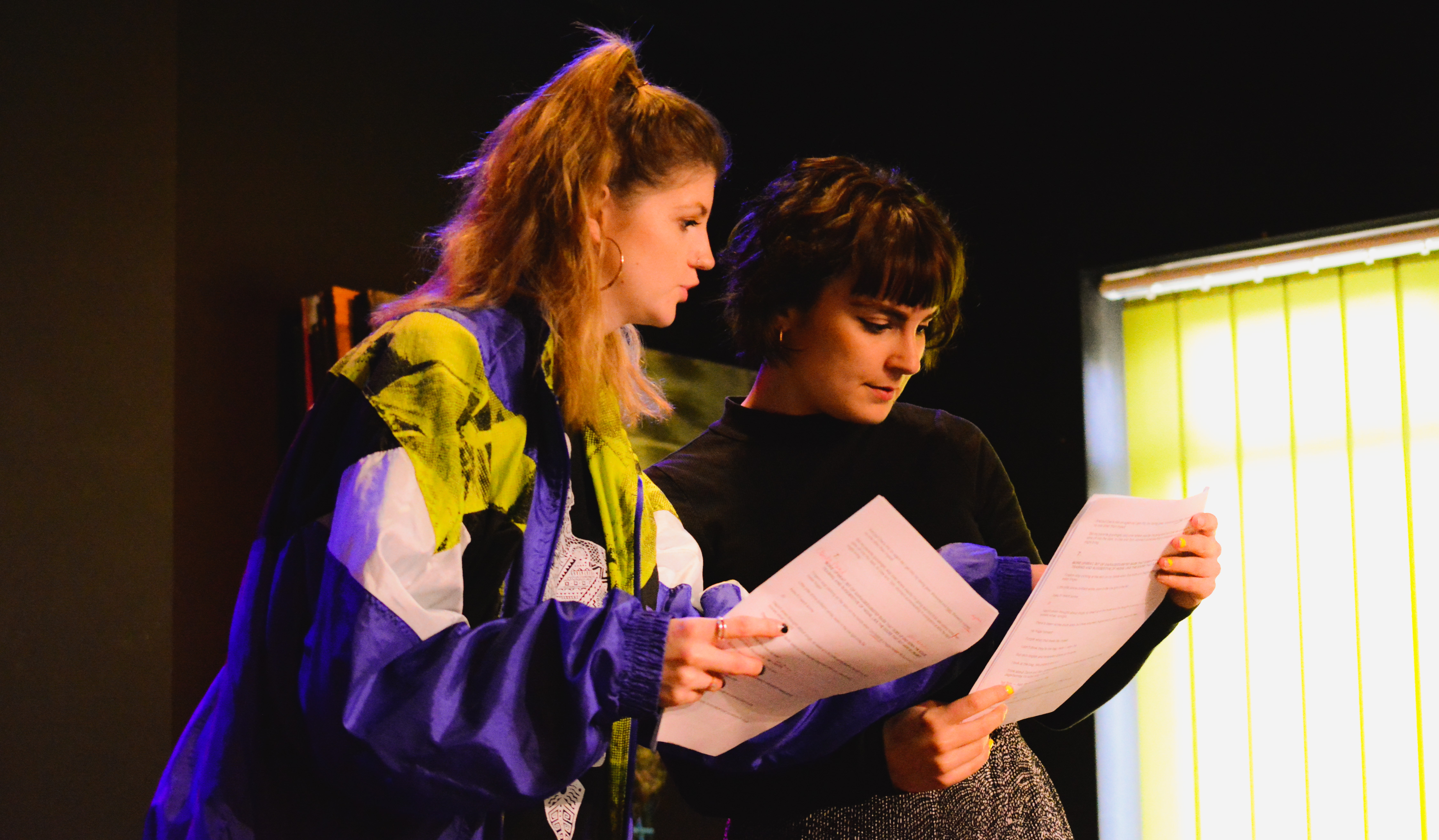 Annabel (r) on the Introduction to Directing programme. Photo by Edmund Denning.

This will actually be my second experience of RTYDS and Middle Child, after taking part in their Introduction to Directing programme in early 2018. During that course, I was able to direct part of a script written by Jamie Potter, during his time with the Middle Child’s Writers’ Group with Tom Wells, about DJing, warehouse parties and mental health. I was lucky to be paired with Jamie as we share an interest in rave culture and gig theatre, and how these forms could tell a story in an interesting way, that might appeal to audiences who rarely experience theatre.

We’ve already spent the past few months preparing a funding application to workshop his script further and my new RTYDS schedule has been shaped somewhat around this, so that I can apply new skills I pick up over the next few weeks to this script and our plans.

In the future I hope to become a freelance director that creates work to reach people who don’t go to the theatre on a regular basis and to tell stories through different media that are relevant to today. Where I am now is still very much at the beginning stage of learning about how to direct and what makes a good director. After this I hope that I will learn the skills and gain insight into being a successful director that produces good quality work.

I am so grateful that I can still do this placement despite recent events. I’m eager to start and learn everything I can about directing, from the rehearsal room to the day-to-day runnings of a theatre company, and I can’t thank RTYDS, Middle Child and Hull Truck Theatre enough for still making this possible.