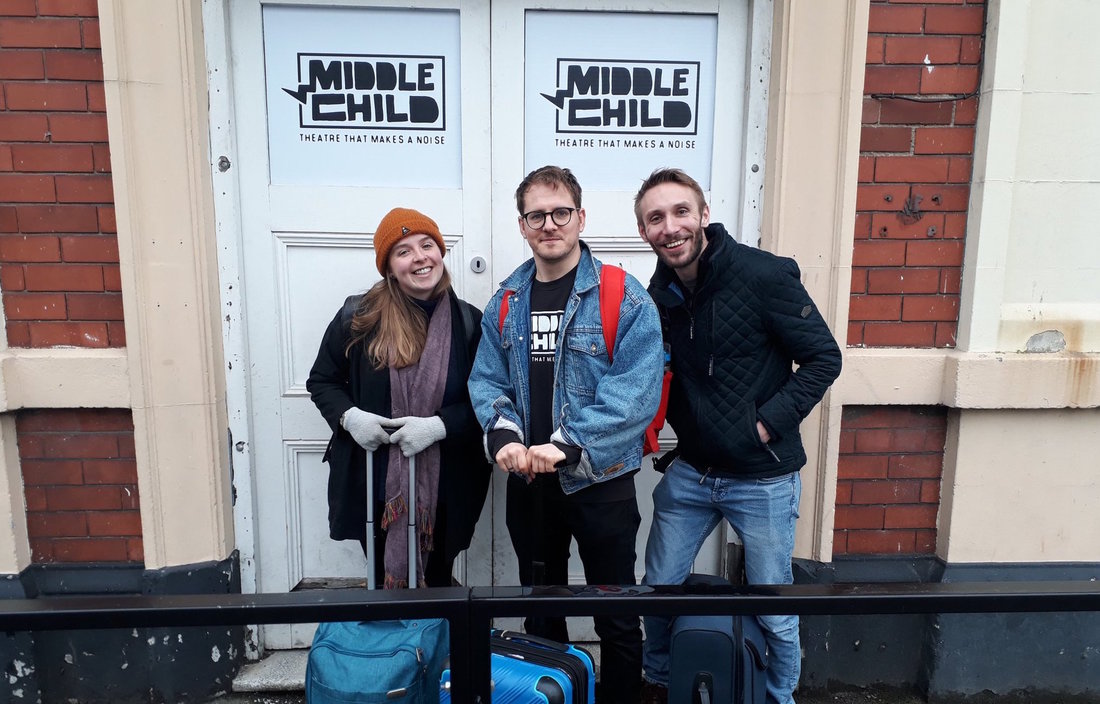 Maureen Lennon, Paul Smith and Matthew May, on their way to Warsaw in April. Not pictured, Magda Moses.

One benefit of having national portfolio status with Arts Council England is the ability to plan productions far in advance. This includes starting work on a major new show that we’re creating for Hull in March 2019, on the subject of Brexit no less.

Hull voted overwhelmingly to leave the European Union in the referendum of June 2016, with 67.6% supporting the eventual result. The opportunity to perform a new piece of work, as we leave the EU, that asks questions of this decision fits perfectly with our aim of bringing people together for a good night out with big ideas in it. And they don’t get much bigger.

Hull is a port city with strong connections to the continent, including a large Polish community, who’ve been all but absent from mainstream conversations on the subject in the city. Hull has also undergone a transformation since the 2016 referendum, as the latest UK City of Culture. What might happen then if we take advantage of an increased appetite for arts and culture to hear different perspectives on Hull’s relationship to Brexit?

Our ambition is to bring together the people of Hull, including its Polish community, to enjoy a night of gig theatre in March 2019 that also challenges our understanding of such a divisive issue. The British Council shares that ambition and has kindly supported us in making two trips to Poland for research and development on the project, with a particular focus on understanding the status of theatre with Polish audiences. We’ve also been invited into the National Theatre’s studio for four days in August, to develop the first draft, which is incredibly exciting.

This week artistic director Paul Smith, associate artist and writer Maureen Lennon, associate artist James Frewer and dramaturg Matthew May are in Poznan, with board member Meg Miszczuk as our guide. We also travelled to Warsaw in mid-April, when Paul, Maureen and Matthew were joined by Magda Moses, who moved to Hull from Poland in 2008 and now works on community engagement in the arts in the city. Below are some of Magda, Maureen and Matthew’s thoughts on that earlier trip.

“This trip was essential for Middle Child to produce an authentic and true show. To understand a foreign nation, the cultures and traditions that shape their national personality and identity, you have to become a part of their community and plunge yourselves into their reality.

“Theatre for Poles means a lot: tradition, sophistication, classicism, splendour, elegancy, but also normality, laughter, politics, childhood and family. I think watching three different performances in Warsaw theatres that were so different gave us a little taste of Polish theatre and their audiences.

“Cezary Goes to War, an autobiographical piece directed by Cezary Tomaszewski, directly and cheerfully attacks and deconstructs the military rhetoric and nationalistic ethos in Poland. We also saw Fyodor Dostoyevsky’s Biesy, directed by Natalia Korczakowska, which used the theme of a rebellion against the tyrant to link it with the present political situation in Poland. We then rushed in the rain to watch a cabaret, Spiritual Show by Fire in Brothel, directed by Michal Walczak, a typically Polish show – lots of names from the history of Poland, specific Polish jokes, especially about the right and left wing, Catholic Church and modern political situation. Two other things that Paul and Matthew learnt were: 1) do not clap during the intervals and 2) do not try to order beer, as it’s prohibited in a theatre building and not posh enough.

“The Polish community in Hull is also very diverse and that makes their interests very different. Those who attended theatre back in Poland continue to do this here, however some have only started to go to the theatre recently as they have overcome the language barrier. What I can definitely say is, children are most important for Polish parents, so any child-friendly artistic event will draw their attention and build your audience.” 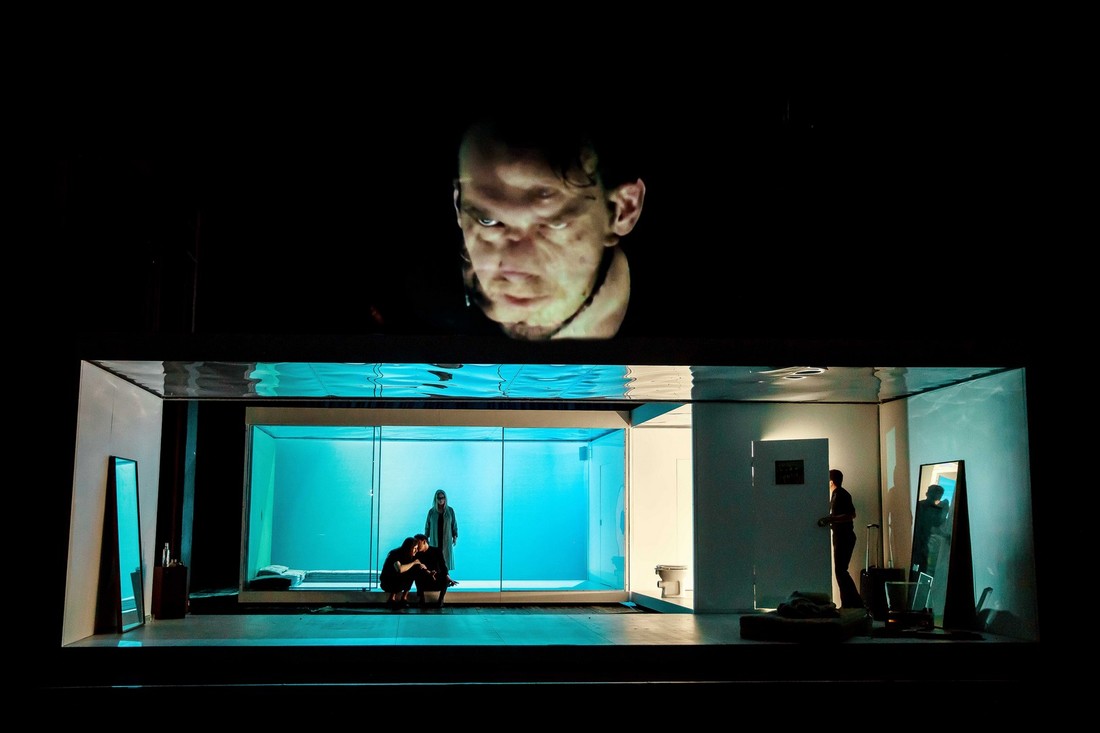 “We wanted the opportunity to dig a little deeper into what it’s like to come from one city to another, and whether we could glean anything about national character, culture and history, which might be able to play into our story. Also we heard Polish beer was really nice and we thought a few pints would probably help us get extra creative.

“We took part in a brilliant tour about communism in Warsaw, led by an incredibly friendly and knowledgeable guide, Artur (The Communist Warsaw Tour in a Retro Nysa Van; look it up if you go to Warsaw). This took us round buildings, past statues, into a locked-down museum with an exact replica of the inside of a flat and included a great game of Find the Vodka.

“It raised loads of interesting questions about the people who might be in our play, and the experiences and circumstances which formed them, about this country’s relationship with capitalism now, and how this compares to our own national identity. But mainly what has stayed with me is the driving. At one point we parked in the middle of a dual carriageway, but then as Magda said: “There are rules, it’s just we like to break them.”

“We also learned about how embarrassed English people are abroad. This time particularly about how little Polish we could speak and how many languages other people could speak. Magda converses fluently about everything in English and Polish. Artur could speak English, Russian, Polish and a made up language called Esperanto. At one point a driver demonstrated four different languages in one taxi ride. This isn’t something specific to Warsaw; I’m just pointing out – it’s embarrassing, isn’t it.

“Also I don’t mean to imply that we were just embarrassed by language; it spanned pretty much everything. I apologised to a man who knocked my suitcases over and Paul got into a particularly weird exchange about coffee outside a museum. We passed this off as an English thing, but maybe it’s just us? Who knows, either way whatever’s going on we’re embarrassed. Sorry.”

“If you get a chance to go to Warsaw, do so. It’s a great city, full of contrasts, culture and some excellent craft beer. I was speaking to my youth theatre group about my trip one Monday night and the thing that I wanted to impress on them is that theatre there matters. It is not necessarily better or bolder, though we did see some incredible and some incredibly confusing work, but it feels more tied up in the fabric of the city. The act of making work feels far more political.

“Paul and I attended an Emergency Briefing on Polish Theatre, where Polish directors, festival curators, actors and artists discussed the increasingly difficult political landscape in which they find themselves trying to make work. They face pickets, economic censorship and, in one case, the loss of employment. This meeting took place in a city that until 1989 was under Communist rule and was essentially destroyed towards the end of the Second World War. This is a city where the history and the politics of its past are writ large in the buildings and the people.

​“So, for me as the political dramaturg on this project it acted as a reminder than throughout the creative process we can never forget the vastly different place that Poland has come from. We can not understand the drives of these people if we see them purely through the prism of our own experiences. That is what I will try and take from this trip; well, that and a love for pierogi.”

Did you vote leave, or do you know friends, family or colleagues who did, who also live in Hull? We’d love to hear from you and them, so have put together a five to ten minute online survey using Google Forms.