Girl on The Platform Smile 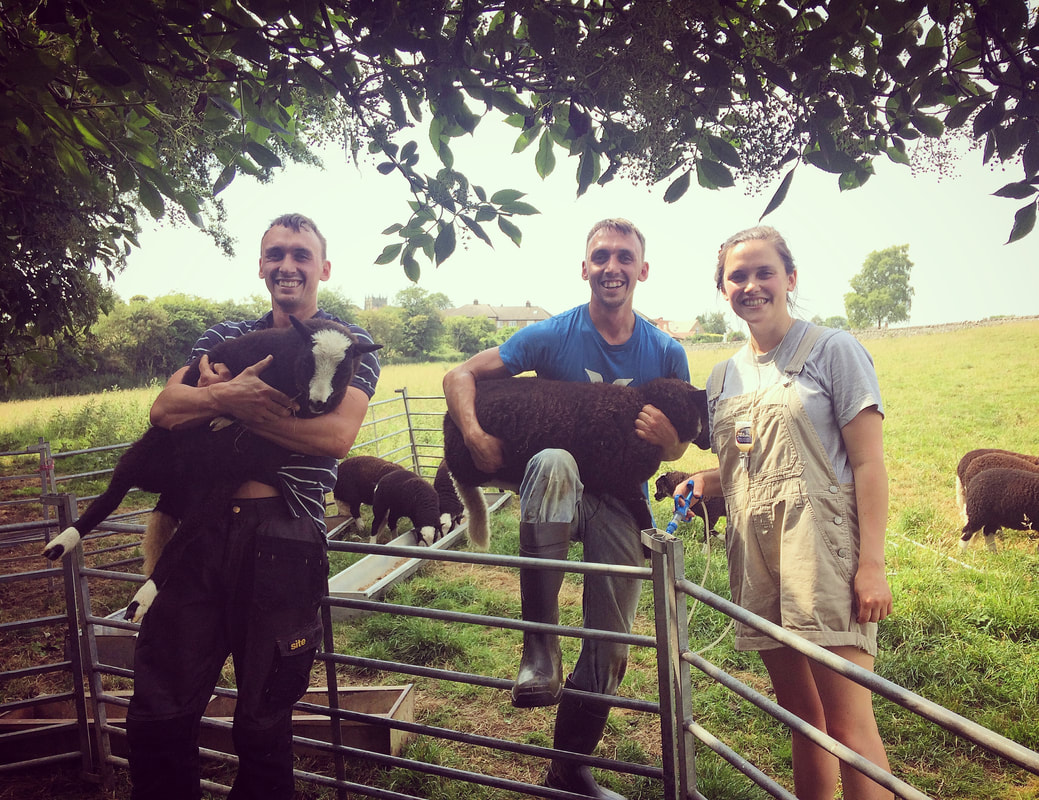 Do you ever find yourself in a situation where you think, how did we get here and why is this our normality?

​I spend a lot of time on trains. A lot of actors do. This particular time, I was on my way back from a weekend working on my mum’s farm with my brothers and sister, vaccinating the lambs, which is about as glamorous as it sounds. Here is the team.

​I was tired, dirty and slightly flustered: thanks to the lack of public transport to Hull, I’d just caught the final train that day. I wanted to get home with minimum fuss and hopefully without any human contact as I felt gross and smelt like sheep poop.I was going to change at Doncaster, which wasn’t too far away, so I thought I’d stand by the door. No awkward eye contact across a table, no forced conversation with the person next to you, just me and a podcast. Cool. Please note: I do like talking to people, just not when I look and smell like poop.

Two guys arrived who were loudly bragging to another they’d just met about avoiding the ticket collector and how they did this most weekends when going to watch the football in Sheffield. They quizzed the man on football, where he lived, the usual small talk. Just keep looking in the other direction and they won’t talk to you, I thought, you have your headphones in, you’re fine.

I then get caught in a conversation while I’m cornered in the doorway. I don’t feel threatened but, equally, I feel the only way to handle this situation and leave the train without being belittled or demeaned is to join in the conversation and laugh along to the jokes. I can’t deal with “cheer up love” or “smile it might never happen” today, I just want to get home.

They keep calling me “love”. They ask my name, say it once and then return to “love”. I keep my cool. We’re all getting off in Donny. Me to change trains and them to go home. As we say goodbye one says: “Come on then, let’s have a hug.” I give them a hug, I walk away, I hate myself for doing this.

Now reading this it might seem like, given the news at the moment, this is a small matter to be talking about, but stuff like this happens all the time and we let it. As a woman I so often feel I have to go along with this sort of behaviour as it’s easier, to avoid confrontation or abuse, to get to the train station, smile and walk away.

How to Start a Revolution

Last week I was once again on a train. No sheep involved this time. I’d been to London to see some bloody brilliant shows: “No One Will Tell You How To Start a Revolution” by our fave Luke Barnes and “Victory Condition” by Chris Thorpe. Both outstanding, both northern writers – yay!

This time I’m with Marc Graham. On the table opposite is a loud drunk man and a woman showing him her niece’s shop on her phone. She has a glass of wine and he has a pint glass that he keeps topping up with vodka and red bull. At first I thought they were friends but, as the conversation progresses, I realise this is not the case: they have met on the train and are being friendly.

She laughs along, they start talking about football and the man on our table joins in as he has also been to the match that day. The drunken man gets louder and louder. I give up on my book, close my eyes and pretend to sleep. Marc has his headphones in. I can’t wait to get off the train so I don’t have to listen to this man anymore.

He starts to moan about the City of Culture. The woman starts talking about her daughter, who is working in Edinburgh – she’s so proud of her. It’s nice to hear three strangers exchanging tiny snippets of their lives. The friendly man on our table who joined in reaches his stop, Brough, about five minutes from Hull.

Then Marc is dragged in to the conversation: “I thought you looked like a bit of a dickhead but you’re actually alright.” This guy is super drunk and he’s started to slur his words. This woman has done a cracking job of talking to him. The train starts to pull into Hull so we start packing up. The man tells the woman how much he’s enjoyed her company, while she talks about everyone else they have met on their journey, including “the students from Sheffield, the nurses, the friendly man from Brough.”

I zone out of their conversation again but my attention is caught as I hear her say, very quietly and calmly: “That’s really not appropriate.”

He makes a swift exit down the train, to the next carriage, saying: “Alright, alright I’m off now.” As soon as he’s out of earshot she lets out a huge sigh and rolls her eyes. I smile at her, a kind of shared, “He was a bit much wasn’t he?”
​
“He stroked my leg three times,” she says. “After the third time I had to tell him it was too much.”

I was completely taken aback. This had happened right next to us and I hadn’t even noticed. I’d chosen to keep out of the situation. She was clearly shaken but just seemed relieved that he had disappeared. “It doesn’t matter,” she said politely, “he was just really drunk.” I said: “It’s never ok.”

We offered to walk her off the train to meet her husband. She was extremely grateful of the offer but made it clear that we were not to tell her husband. As we left the train she talked about how her daughter (aged 21) lived for a year in London for her first job, where “she received so much abuse walking down the street she still has anxiety about it.” She’s a little bit teary now. We can see her husband by the entrance, she thanks us, says goodbye and goes over to give him a hug. We walk home.

He’d talked openly about his girlfriend, she’d talked about her family; there was nothing that could have been misinterpreted. He did it because he could, he did it under the table so no one could see, he probably won’t even remember the next day because he was drunk. But that’s not OK. And I was angry because the same thing has probably happened to his girlfriend or his mum or his sister and I’m sure he’d be fucking angry if he knew that. But this happens all the time and we don’t say anything.

We need to start talking. So I’ve written this blog because at Middle Child we have a platform to talk to people and make our voices heard. I’m using my anger to make sure other women and men know that this is not OK and the problem is HUGE. It’s fucking massive.

So how do we start the revolution? Well first of all we need to start calling people out and we need to reassure women and tell them this sort of behaviour is never OK. The #metoo hashtag has shown how widespread a problem this is. But this shouldn’t be just on women to highlight the problem: men, we need your voices too.

I am sure a lot of men have kept quiet on this to not detract from women’s stories but I feel like now we need some recognition from both sides. We need to work together to stop this and call those people out. On the Guilty Feminist Podcast on “Male Privilege” Deborah Frances White said: “Confidence is the product of our experience.” It really struck a chord with me. We need to change the narrative. We all need to give people the confidence to speak out, free of judgement.

So many times I have started to write a blog for Middle Child and then deleted it because I’ve convinced myself that I’m not clever enough, or the point has been made more succinctly by someone else or no one will care what I think. We have women in Middle Child and our voices and those opinions will only be heard if we put them out there.

Maybe it will inspire other women who feel the same anxieties as me to say something too. As ever, I doubt every word I’m writing, I feel slightly sick at the thought of other people reading it, but I’m going to post it because we need to lead by example. Also, Ellen has written a flipping brilliant play this year, I Hate Alone, so what more inspiration do I need?!

I’ve also questioned whether my own personal experiences are ‘big’ enough. I’m grateful to have not experienced some of the things that I’ve read other women have been through. I do however have a constant fear that something like that could happen to me walking down the street, in the workplace, on a train. We need to stop doing ourselves down. If it’s happening every week, if we feel the fear, it is big enough. It has taken something huge like the Harvey Weinstein case to kick this off but we need to ensure that every woman feels that her experiences are of importance.

Let’s make sure that within the theatre network there are safe spaces for women to come forward. Vicky Featherstone’s Day of Action is a great start. Unsurprisingly, her call out highlighted the fear of speaking out and the potential effect this could have on an individual’s career. Speaking personally as an actor it already feels like you have to sell yourself all the time, so I don’t find it surprising that people have found they have had to keep quiet about something or someone because of their role within an organisation.

It should not be an excuse. I imagine this is the same across the board – directors, stage managers, designers, technicians. So many times getting a job can be about who you know. It can create a muddy area where you feel you want to protect your career – your livelihood – to the detriment of letting this behaviour continue to happen.

Now more than ever we need to make sure women feel they can voice this. We need to make sure that we can be open and honest. The focus needs to be on the problem and the causes, not mourning the loss of theatrical idols. We need a big shift. We can’t make excuses for this anymore.

And while we’re here, let’s stop reviewing women based on their looks. I read one today and it made me want to be sick in my mouth.

So thank you to the lady on the train that made me want to write my first blog and say this is not OK. It’s for her, her daughter and every other woman who feels they can only smile and walk away. It’s about the everyday encounters and the fear of speaking out.
​
This is our industry. All of us. This should not be our normal.